Leuven became a member of Street Art Cities in April 2020. This is certainly reflected in the many works of street art that you will find here, quite a few of them are veritable gems in this genre. Blogger Ann Vandenbergh of the website wANNderful selected her favourites for you.
By
Ann Vandenbergh • wANNderful

Racing past Leuven’s ancient city walls it’s easy to miss this lying lady. So, opt for slow travelling by bike or on foot and discover this beautiful work of art by Bisser on the wall of the Shelter, a relief centre run by the De Wissel non-profit organisation. Although Leuven hosts quite a few of Bisser’s fabulous works, I find this to be one of his most poetic and moving. It’s hardly surprising that the furore created by Bisser on the international art scene is so great that his work is known as far away as Brazil!

Would you like to see more work by Bisser? If so, be sure to head to the Vaartkom, where - behind the former customs warehouse, now OPEK Arts Centre - you will find the beautiful ‘Kraken gaat door’ artwork, which is a perfect match for the (until recently) vacant properties in this former industrial neighbourhood. Most industrial buildings have now disappeared or have been repurposed.

Look up when you arrive at the Vaartkom 34 quay and spot the astronaut by Leuven artist Pieter Janssens on the old loading and unloading installation. On the other side of the Vaartkom you can see his counterpart dangling from the giant silos next to the former Van Orshoven mill. With his three-dimensional street art, Janssens protested against the run-down state of the old industrial neighbourhood. He also makes socially engaged art with local residents, such as the giant heart of recycled plastic bottles that you will find next to the modern homes of the Balk van Beel.

Are you game to discover even more talented artists from Leuven? If you are, you should certainly take in some of the works by Vera DinDin, which are located all over the city. One of her most fascinating murals is At the Meadow, the meadow landscape with which Vera DinDin transformed this concealed corner of Leerlooierijstraat into a green city garden, complete with hedgehogs, geese and butterflies! ! There are also many works by this Leuven street artist at the Pleinstraat, at Camilo Torres and in Kessel-Lo.

The stencil art created by Jaune is charming and absolutely fascinating. This Brussels-based street artist pulled out all the stops on the concrete walls in the courtyard of the Camilo Torres student housing complex. The work resembles a comic strip, in which his work shines a humorous spotlight on some our society’s ‘invisible’ garbage men in their fluorescent jackets. Be sure to take enough time for a good look at the many funny and exciting details from close up!

Tip! Camilo Torres is also a super-interesting location for street art spotters. In the stairwells of this brutalist-style seventies student residence, a great deal of Leuven's talents have let their hair down: do you recognise the works of DinDin, Bisser and Waldorf Claw?

This black-and-white mural by Leuven artist Intvis (Patrick Ceusters) near workers’ houses on the outskirts of the city is a surprising view. Can you imagine the atmosphere of harsh deprivation that must have prevailed here in earlier times?

For this mural Intvis was inspired by a historical photograph of workers going towards the former Philips factory in Leuven. The work is painted on the façade of the protected worker’s house where one of the last workers is still living. That makes it more than just a work of art, right?

Tip! Turn around 180 degrees for a moment. On the other side of the Brusselsestraat you will discover ‘Now You See Us’, a colourful work by the same Intvis for the Sint-Jan school.

I am completely enthralled by the graphic animal figures created by Antwerp artist Dzia. His brightly coloured peacocks, pigeons, wolves and foxes have stealthily invaded the city, making it their own territory. When I first saw the mural with the giant foxes in the sub-municipality of Kessel-Lo, it was as if I had been nailed to the ground. Can I take one home? Please?

This strapping girl carrying a suitcase has been beautifully and realistically integrated into her surroundings. Looking at the mural, you would hardly realise that her suitcase is actually a feeder pillar! There is also something enigmatic about the girl: is she coming home or leaving? The highly charged mural was created by Smates, an artist from Mechelen. Be sure to check it out!

And an extra for those who want to see more of Smates: a little further down the same street, you will see a cute little boy with a rose on one of the façades. Is this the brother of The Girl with the Suitcase?

It seems to be a classic painting, an ode to the brave Hortense Daman! As a child, she used to live in the Pleinstraat in Heverlee with her parents and at the young age of 13 she became involved in the resistance. On 14 February 1944, she and her parents were arrested by the Gestapo and deported to the Ravensbrück concentration camp. Hortense survived the camp, moved to England and died there at the age of 80. Since 4 September 2022, she has also been an honorary citizen of the city of Leuven. You can read her story in the book “Child at War” by Mark Bles.

In the nearby Pleinstraat you will find even more street art, including art by Treepack and DinDin.

Although this may be one of the best-known murals in all of Leuven, it is one I can never get enough of. Super-A and Collin van der Sluijs evoke the atmosphere of the nearby Park Abbey ponds, with their wealth of flora and fauna, in an incredibly smart and artistic manner. A mural that you simply can’t miss!

Tip! A little further on you will find a fantastic eagle owl by the same artists on the façade of the St. Norbertus school. And take the opportunity to enjoy a relaxing walk around the ponds of the Park Abbey. Stunning views guaranteed!

If you make the entire loop around the ponds, you will discover this fairytale animal-rich drawing by Treepack at the railway bridge with the Hoegaardsestraat. In a style reminiscent of a story from a children's book, you can walk along the fauna and flora of the Parkabdij ponds.

Even more animals on the walls of Leuven! Vadim Mezzo, one of the best-known Russian street art artists, travels through Europe, leaving his signature in every major city. In Leuven too, this beautiful mechanical bird testifies to this. Yet few know how to find this work, which is well concealed in one of the smaller, hidden Leuven parks. A hint? The Wolvenpoort.

Dream away at the end of your street art tour by taking in the mural brush-painted by Toon Van Ishoven on the wall of Leuven’s Tweebronnen library. What could be better than sitting in the sun enjoying a good book?

Would you like a few more tips for discovering street art in Leuven? Check out my street art bike tour in Google Maps or put together your own with the free Street Art Cities app.

With so much street art to see, you can’t help but stay overnight. Check out our nice accommodation here. 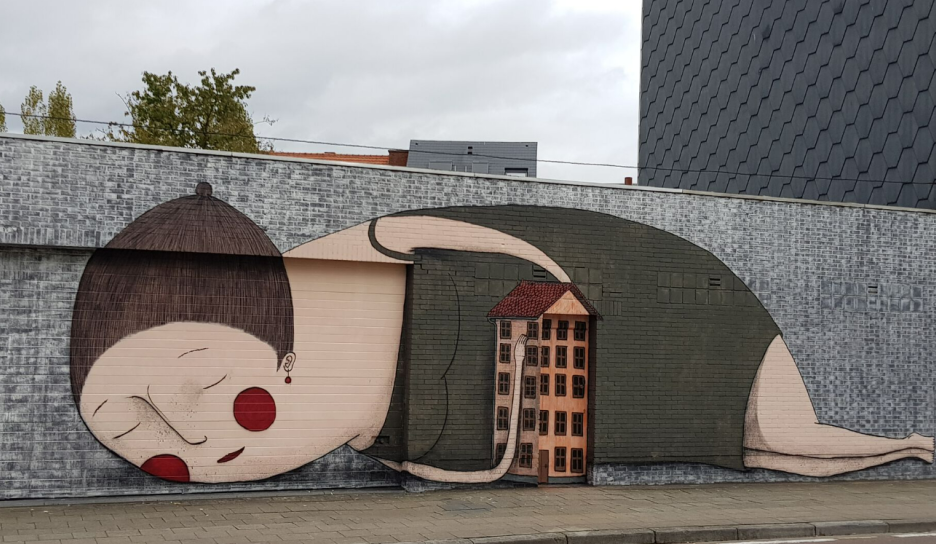 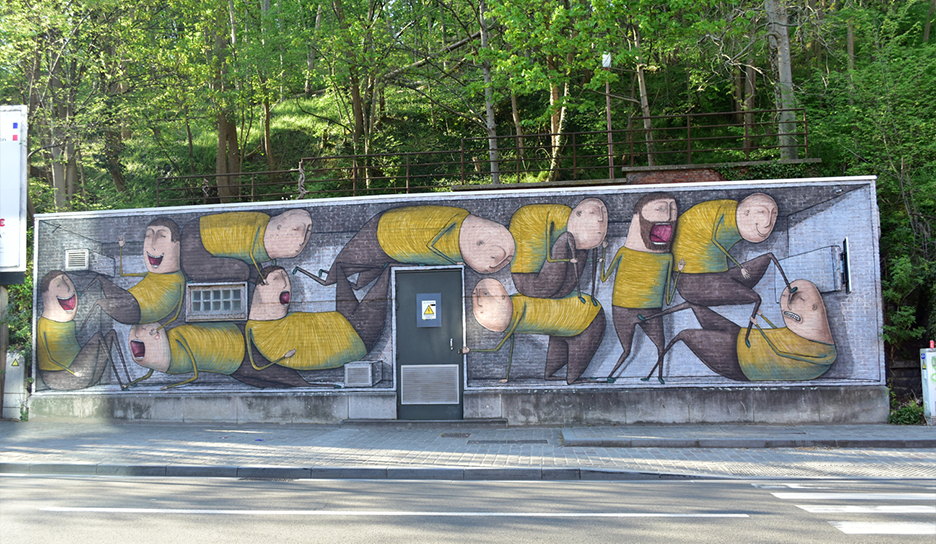 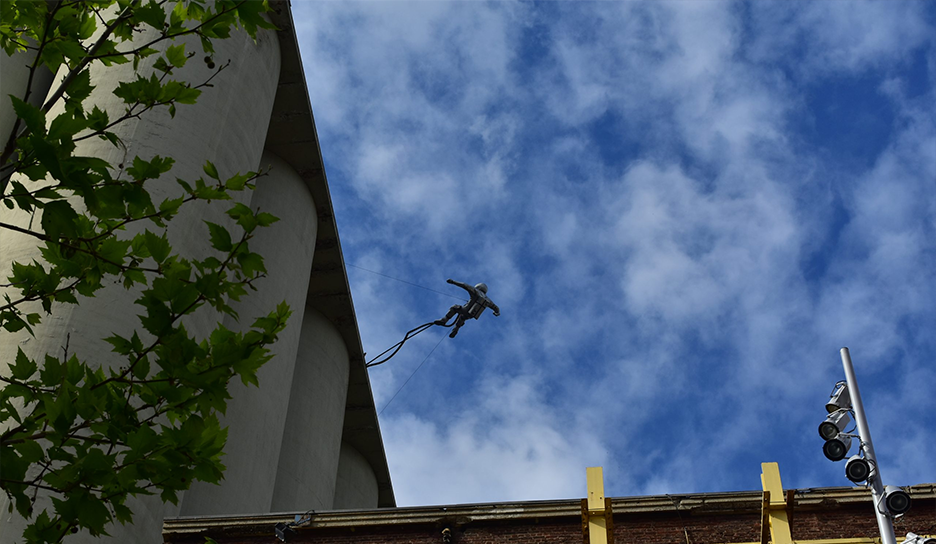 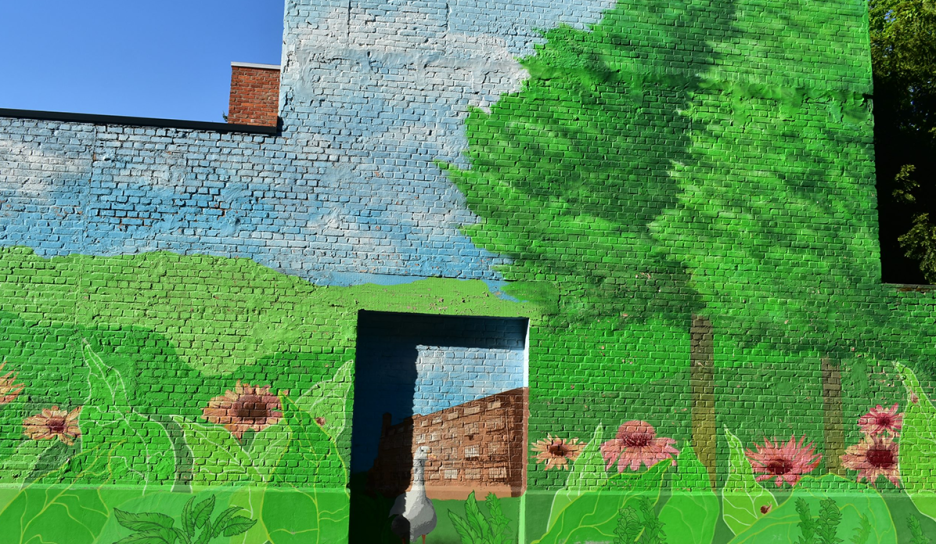 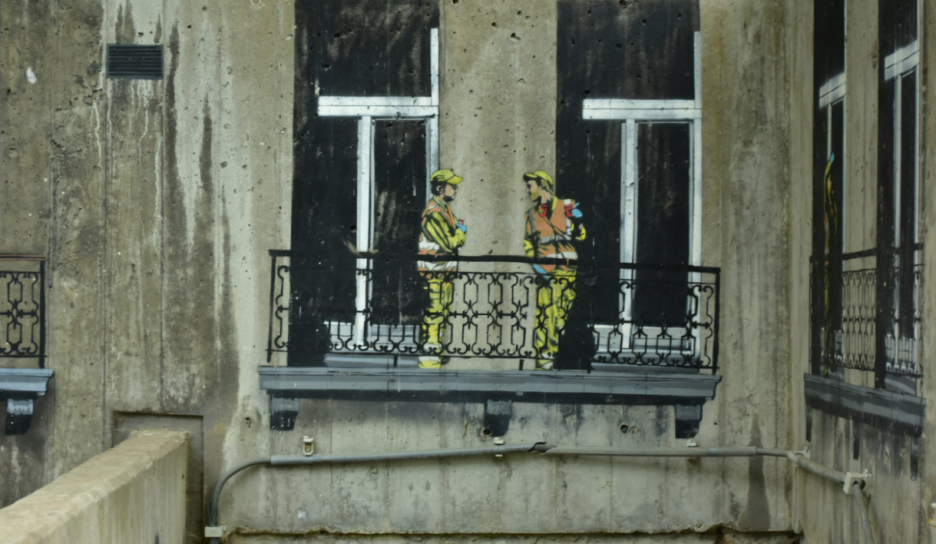 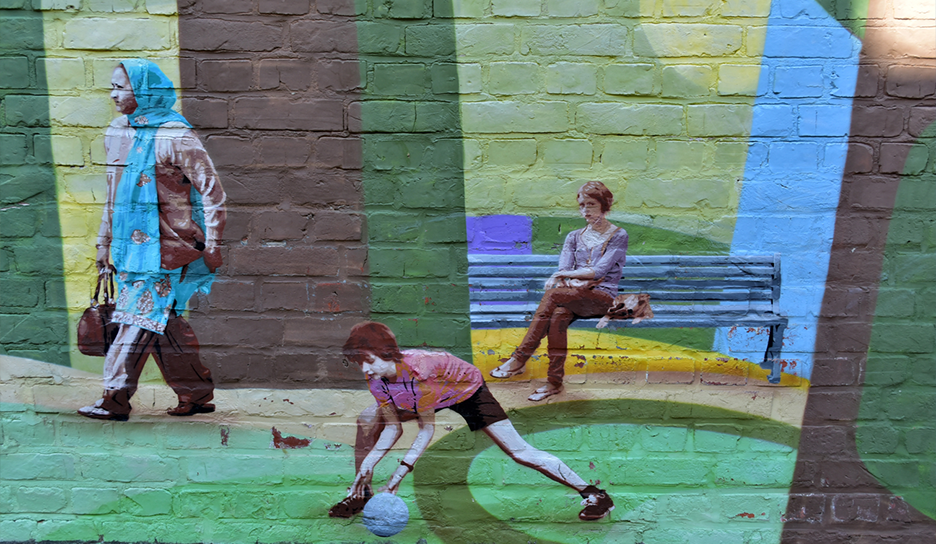 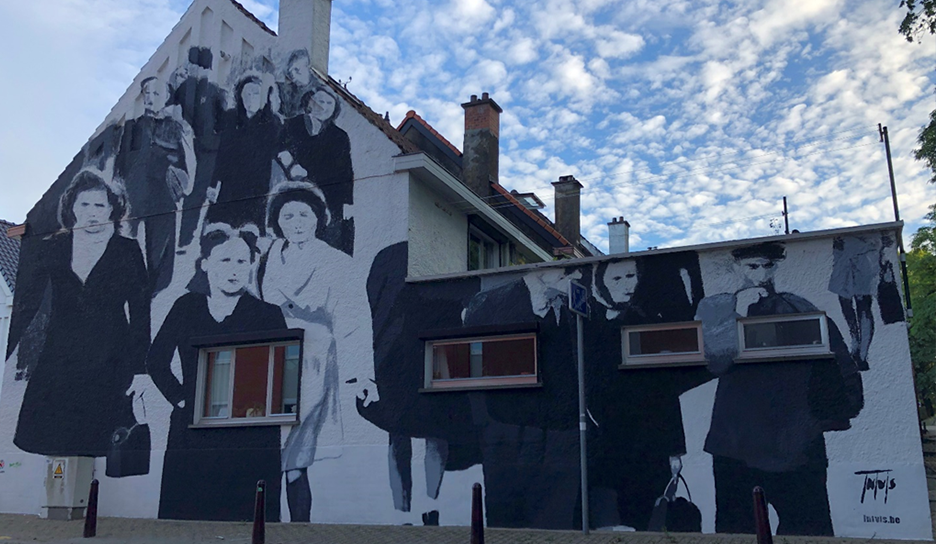 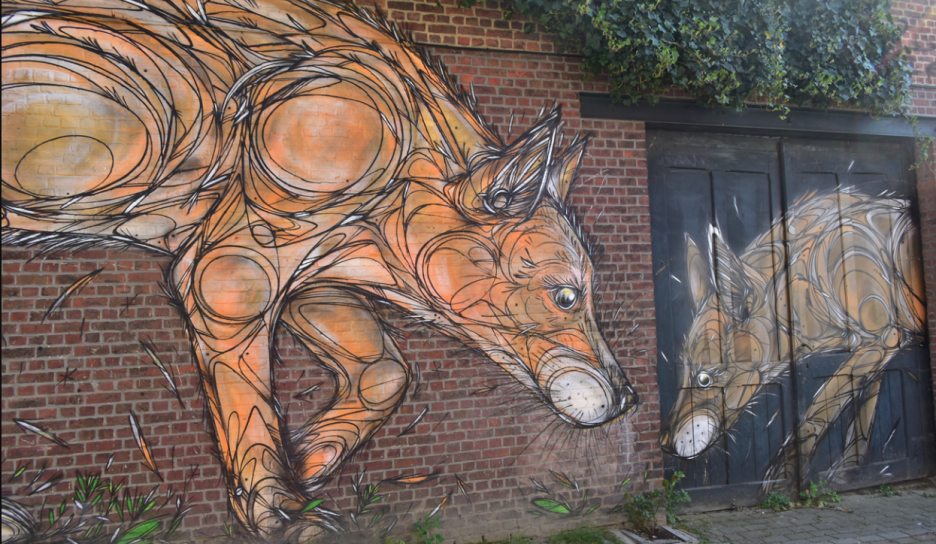 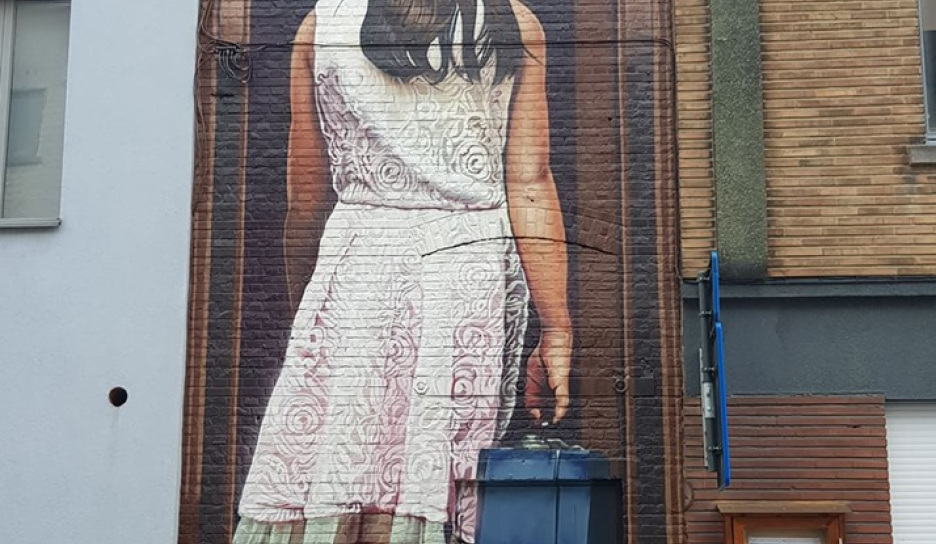 Girl with the Suitcase • Smates/Treepack
9 / 13 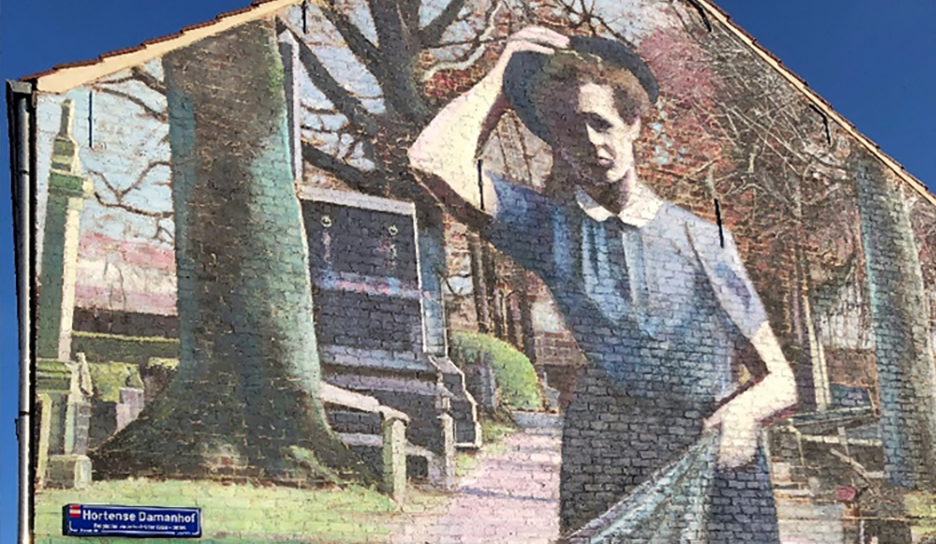 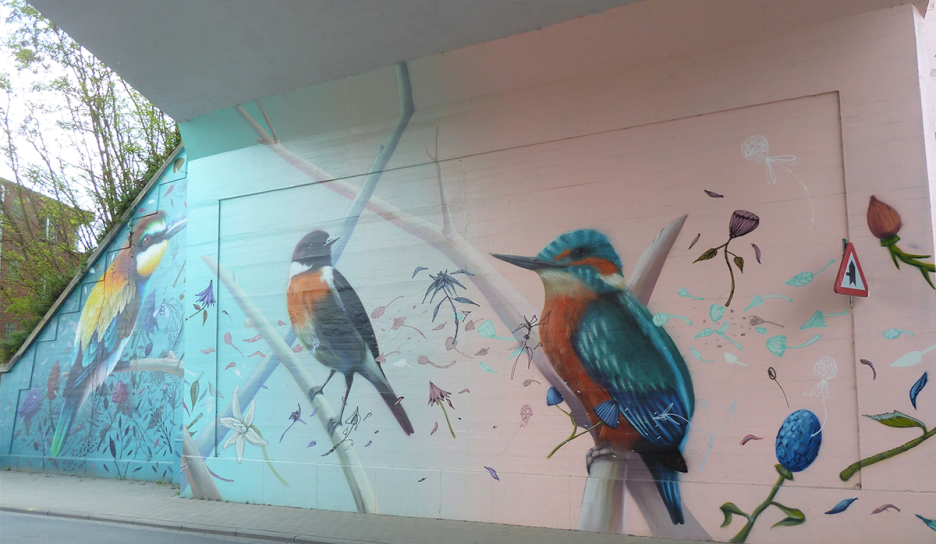 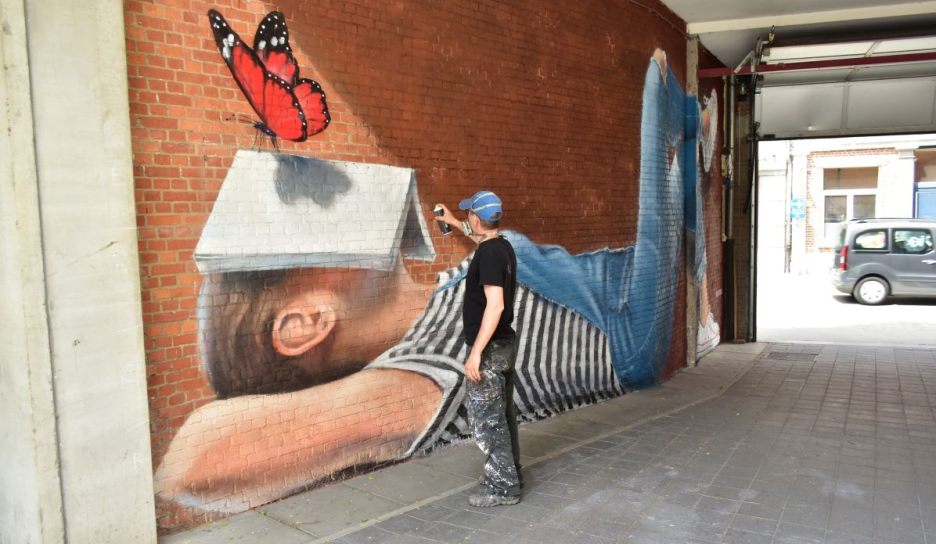